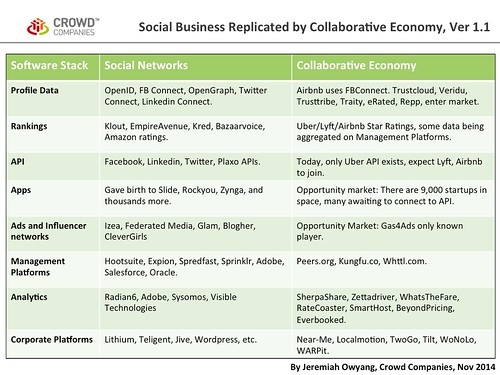 For over ten years, I was a social business professional. I helped Hitachi launch their program as a full time employee in 2005, started this Web Strategy blog, joined Forrester Research, and became a founding partner at Altimeter Group. I saw the genesis, evolution, maturity, and integration of an entire market in less than a decade.

Today, another decade later, I’m witnessing the birth, growth, and emergence of the next phase of social connection: the Collaborative Economy. In social media, people created media and shared it on social networks. In this next phase, people are creating physical goods in the maker movement and by crowdfunding, and sharing them in revolutionary movement that we call the Collaborative Economy.

In the preceding graphic, you’ll see that many of the Social Business software players that I’ve researched are now replicating in the Collaborative Economy space, from profiles, data, APIs, apps, analytics players, corporate platforms, and more. I’ll be sharing this graphic and other data at my keynote at LeWeb in a week where I’ll be forecasting 2015 the Year of the Crowd.

Social Business was a fast-moving industry that’s starting to integrate into corporations. If you saw how that industry birthed and grew, and were a leader or practitioner, you’re ahead of the pack and can grow your career in this next phase, the Collaborative Economy.

If you’re a Social Business professional, here are a few resources to get you caught up to speed: