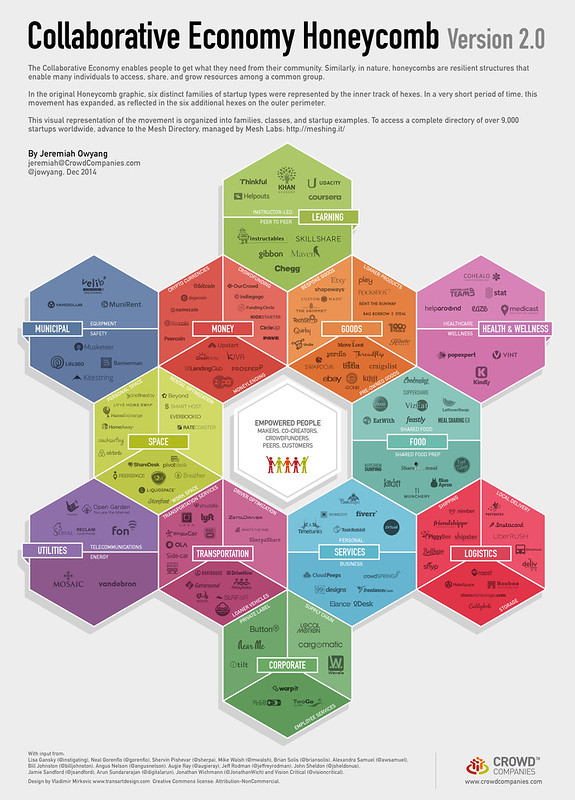 I’ll be releasing this graphic on stage tomorrow at LeWeb conference in Paris, on a session called 2015: The Year of the Crowd.

Seven months ago, in May 2014, we published the first version of the Collaborative Economy Honeycomb, which is also embedded at the bottom of this post. It contained six families of industries that are being impacted by P2P commerce, including: 1) Goods, 2) Food, 3) Services, 4) Transportation, 5) Space, and 6) Money. Today, we felt obliged to update the graphic, as it’s quickly expanded into many other industries and verticals. While many of these startups have been around for years, the new Honeycomb contains additional startups in the six original hexes, as well as noting expansion into these areas:

It’s worth noting that in the newer hex areas, they are often fewer logos as the market is young –in the more central hex areas, we had to remove logos due to excessive market crowding –a sign of market saturation in one area. I expect to see new hex areas in data, analytics, and a variety of new startups that offer help to providers such as insurance, financial services, benefits and more.

About this multi-month project
For transparency, these startups reflect those that were recommended by our members, industry experts, or which have received notable funding in the recent months. You can learn more about the funding, on this massive funding spreadsheet which has over 530 rows of funded startups, totaling over $7 billion in funding. The startups selected in this honeycomb have a Western market focus. You can create your own blank version of the Honeycomb for your own for your personal, business, or regional use, embedded below.

There are numerous folks we want to thank
We received input from our own Crowd Companies members and industry experts, and drew inspiration from folks like Brian Solis, who guided on the first iteration. To see a massive directory of over 9,000 startups in this market, please advance to the Mesh Directory managed by industry leader Lisa Gansky.

Access the services directly
Below, you can access direct URLs to each of the startups listed in the Honeycomb graphic, except for the cryptocurrencies which are decentralized resources. Again, this is just an example list of the 9,000 startups in this ever-expanding, heavily funded startup space.

Below: Each region, business, and personal usage will vary. In the spirit of openness and collaboration, we offer this blank template below (or access various sizes) for you to customize for your needs. 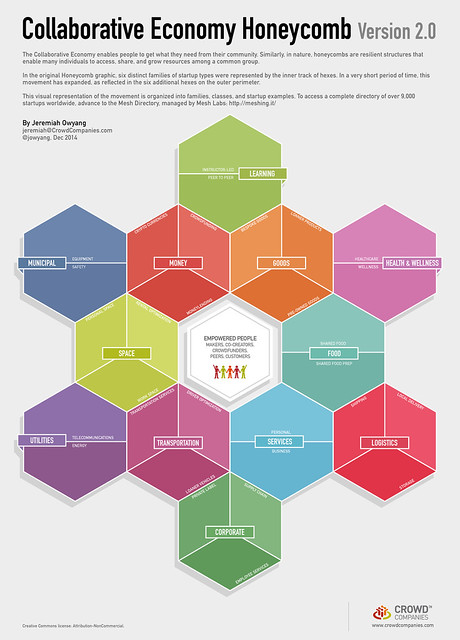 Below: For reference, the first Honeycomb (version 1.0), with the original six categories, is below: