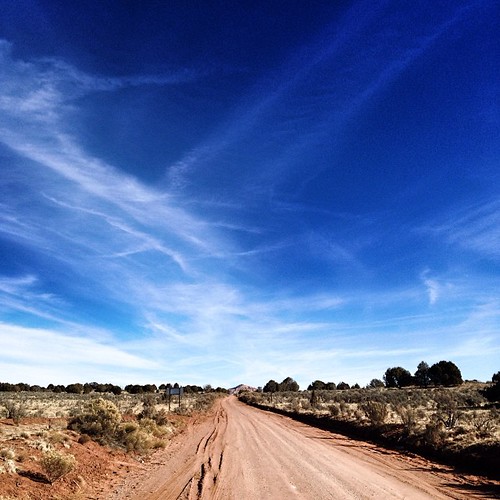 “The Long Road” a photo by Kris Krug.
People often ask me, “which term should I use?  the sharing economy? collaborative economy? the trust economy? or some other term?” I give my answer, but often remind them if we’re successful, it’ll just be called the Economy.

New movements naturally experience a period of exploration, debate, and adoption of new terms. Over time, the use those terms tend to fade away as other new terms are introduced.

About a decade ago, I was intimately involved in exploring the first phase of sharing, social media, from a business context. Today, ten years later, as the physical world is being shared more efficiently through technology, I’m observing similar patterns of change.

As the first phase of sharing matured, it became referred to simply as “social media.” Even that identififaction is fading into the background as it has become nearly fully integrated into mainstream communications. One can hardly find a mainstream news source that doesn’t integrate social media tightly woven into communication, such as websites, email, news, TV, glasses and “whatever-Apple-wrist-watch-comes-next.”

In our current movement, there’s many-a-term being used to describe what’s happening. Here’s a list of examples, in alphabetical order:

As new terms are being coined by multiple entities, there’s clearly growing confusion in the market. Rachel Botsman has taken a swing at clearly articulating the differences in this FastCompany article. She rightfully points out that the terms have different shades of meaning, intent and perspective to the parties that use them.

Sure, I’ve invested a lot on the term Collaborative Economy, as it works well for what we’re trying to accomplish. But a few years from now, we’ll all look back and laugh at all the terms we used, as the prefix of the “X Economy” fades away and it returns to just being the economy. That’ll be proof that we’ve succeeded.

By nature, new movements can be massive, but they impact each person in a unique way. As a result, movements jostle over the terms to be used until they are refined into a common market language. Ultimately, however, when movements are successful, the descriptors become irrelevant, as what was once a disruption becomes the way of life.

Each term will resonate more with certain groups, but in the end, if we’re successful, it’s just the Economy.