The Collaborative Economy is emerging as the defining societal narrative for 2015 and beyond. In this burgeoning, economic model, individuals use commonly available technologies to obtain resources from their peers, like use of homes, cars, money, and other goods and services. These technology-based companies enable people to bypass inefficient corporations, find favorable alternatives to entrenched, established channels, and confront existing, draconian, government regulations. 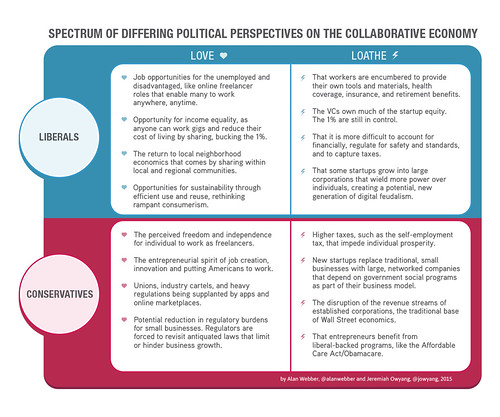 Above Graphic: Spectrum of Political Perspectives on the Collaborative Economy

Above Slideshare: Spectrum of Political Perspectives on the Collaborative Economy, detailed

How big is this market? We know that the startups in this space have already been funded with nearly $11 billion, Most of that funding has come in just the last few years. According to PwC, this movement could be worth $335 billion by 2025. Sharing and circular economy strategy was a featured topic at the World Economic Forum at Davos in January, an indication that we should expect to see more Collaborative Economy models and businesses emerging in the future.

Early sharing idealists hoped the sharing model would produce a Libertarian Socialism in which, by using technology, people would operate communally, sharing their homes, foods, clothes, etc. The injection of billions of dollars of venture capital to fund infrastructure and growth for these tech startups means that investors will demand a return in their investment, resulting in IPOs and a return to Wall Street economics. In reality, this is actually a form of tech-based capitalism, not the app-powered, hippie communes some perceived it would be.

As social movements, markets, and industries grow and become more visible, they also become larger targets for politicians and bureaucrats trying to keep public interests in hand, extract relevant tax revenue and spin them for political value. The Collaborative Economy is no exception. Each individual facet might be seen politically as either a positive or a negative. For example, eBay, one of the older sharing marketplaces, allows people to recycle goods and receive money for it. A liberal might consider eBay as a positive in that it reduces the amount of waste that is deposited in landfills and because of the additional tax revenue it generates. A conservative might see eBay as a positive in that it provides a platform for individuals to start and build their own businesses.

Both liberals and conservatives have embraced different aspects of the Collaborative Economy. For example, Senator Marco Rubio (R-FL), speaking at the DC Uber office, praised the “innovative startup,” backing the idea of breaking the juggernaut of big unions and regulated medallion cartels. Rubio said that, “regulation should never be a weapon that is used by connected and established industry to crowd out innovation and competitors” (Miami Herald).

Uber recently hired David Plouffe, a political strategist for the Democrats who was the campaign manager for both of President Obama’s presidential races. Liberal politicians haven’t embraced specific startups in the Collaborative Economy in any political messaging or action, but some have embraced the idea that the underlying social and economic architecture that allows this new economy to grow is dependent on social programs like Obamacare to provide for the growing number of freelancers and small entrepreneurs. California was an early adopter in proposing legalizing many forms of ridesharing, led by the Public Utilities Commission in 2013. The City of San Francisco has legalized Airbnb, gleaning a 14% hotel tax from its transactions.

When it comes to the emerging Collaborative Economy, the only thing that is clear is that there is no definitive ideological line. Both liberals and conservative see aspects of emerging companies and business models that they like and dislike. These technologies will amplify behaviors and value propositions from both perspectives.

A few things are becoming clearer as the Collaborative Economy becomes more normalized across society:

Sitting in the back of a car during an Uber or Lyft ride, it is possible to see that, like any other company or business, the Collaborative Economy has many different facets that are either liked or disliked across the political spectrum. But, what both sides can agree on is that the Collaborative Economy takes advantage of technologies in both existing and emerging industries, empowering the working person, building resilient and sustaining communities, and leveraging the government for economic benefit.

From the liberal left to the conservative right, there’s no clear ideological perspective, as there’s something for everyone in this growing Collaborative Economy.