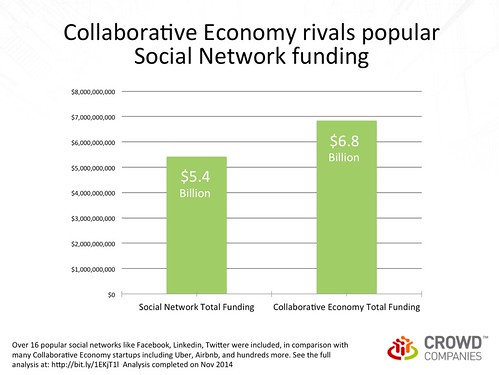 Social networks were the first phase of digital P2P. They enabled anyone to create media and then share it. The Collaborative Economy is the second phase. It enables anyone to create goods and share what they already own. So, how similar or different are the funding amounts for these two movements? This post provides some insight.

There are many ways to compare industries. I’ve conducted analysis on: adoption rates, attitudes, growth rates, and, in tech-heavy industry, funding rates. While investors have often known to be wrong, funding indicates bullish attitudes based on financial analysis and gut reaction to new markets. It’s a metric we must analyze.

If you want to see the full perspective of funding, advance to the Google Sheet of Collaborative Economy funding. Please note that there are multiple tabs.

To produce this comparison, we gathered publicly available information about consumer-facing, popular social networks, like Facebook, Twitter, and LinkedIn (and 17 others) to find out how much money a mature market, complete with winners, losers, and IPOs, has been funded. Next, we gathered public data about funding in the Collaborative Economy (Uber, Airbnb, Indiegogo, and hundreds others) to see what we could find.

Summary
This doesn’t mean that all Collaborative Economy startups will succeed. Markets often only have room for three players – not like the dozens of transportation players currently available. It could also mean that Collaborative Economy companies need to be more resource-intensive to lift off the ground. It certainly means that investors, many who funded social networks, are also bullish on this next phase of P2P sharing.