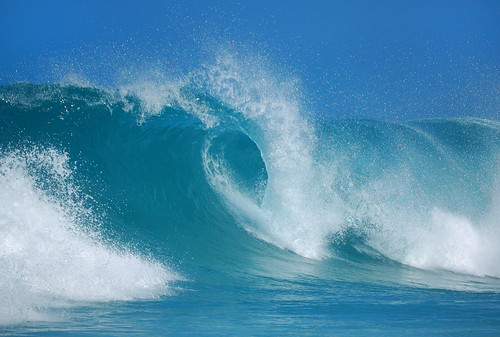 The Collaborative Economy market is growing at an accelerated rate. Not only is adoption increasing by individuals at a rapid pace, but the VCs have invested a massive $16 Billion to pad the war chests of these disruptive P2P commerce startups. Corporations aren’t standing on the sidelines waiting to be disrupted, the progressive companies are leading the charge by deploying these same strategies and technologies. The following three slides show market growth, adoption by brands, and indicate how companies are deploying, you can view all the data in a Google Sheet, live on the web and thanks to Amy Bishop for her research analysis managing the sheet. 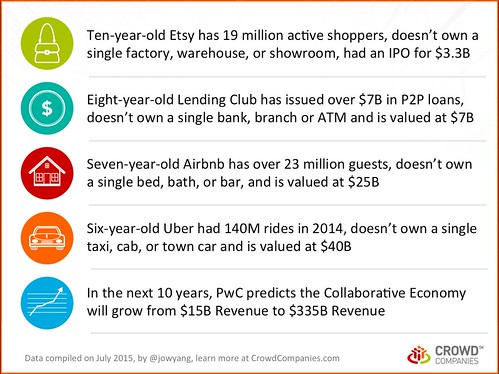 Above: These five stats indicate the growth of the disruptive startups: Young companies, rapid growth, high volume, low assets, and high valuation show how business models based on networked based technology quickly achieve scalable growth. Often, traditional companies are based on the principals of the Industrial Revolution, owning many assets and achieving linear growth. 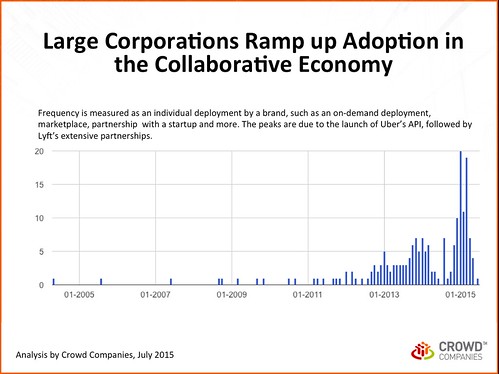 Above: Large corporations, which we define as companies with over 1000 employees, $1B in revenue, and are often Fortune 1000 companies are also adopting, many in the last two years. Towards the end of 2014 we saw a significant increase in adoption in part from Uber’s API which led several partnerships, and Lyft’s aggressive partnerships in early 2015. Coincidentally, Crowd Companies is just over a year-and-half-old, launched right before the large companies started to deploy in scale. 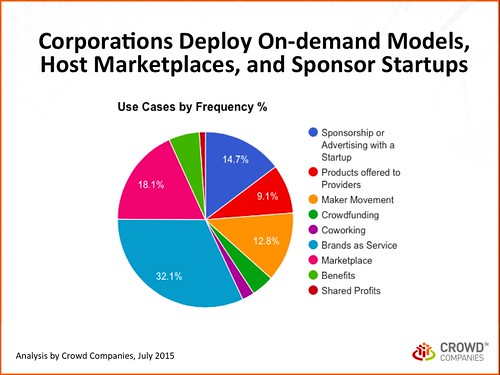 Above: You’re probably wondering what corporations are doing, in order of frequency, they’re deploying what we call as “Brand as a Service” which include on-demand models, such as Whole Foods partnering with Instacart, rental models like BMW’s DriveNow program. Corporations are also launching their own marketplaces, such as Cisco’s used networking marketplace, Patagonia’s used apparel store, and Ikea’s marketplace of used goods. Lastly, companies are sponsoring the startups with advertising, or co-marketing such as Lyft and MasterCard for “Priceless Rides”, or KLM partnering with Airbnb to offer a unique airline apartments for rent.

Conclusions
Companies are quickly jumping into the Collaborative Economy, but frequency doesn’t indicate success. While there’s been over 190 case examples, I only know of the business results of a few, and to my knowledge only one company (BMW) has indicated that a program was profitable, in public. One thing is for sure, this is the market for the brave early adopters who want to lead the charge, not wait for the movement to pass them by, and in many cases these corporations embrace innovation, and therefore the risk of not seeing direct results for a few quarters or years. Also, when we launched Crowd Companies there was approximately 70 case examples, and since then, there’s been about 120 more deployed in a year and a half, many by our own members, the pickup is certainly increasing. The adoption will only continue to increase in frequency, to the point where we can no longer accurately track deployments as every corporation will have dozens of iniatives.